Posted at 17:51h in Press by Acton Style Group
0 Likes 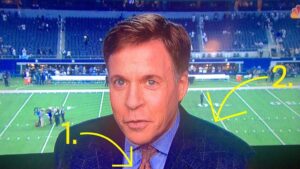 For years, NFL commentators have been punching bags for style-minded men as the worst wearers of suits on the planet. Pizza-width tie knots, gaudy color combos, and boxy tailoring have made them an easy target, but last night NBC’s Bob Costas put on a veritable fall style clinic. Costas has been known to come correct on camera before (that is, when his eyeballs aren’t falling out in Sochi), but his windowpane suit with foulard tie are in a league of their own. It goes to show you how easy it is to wear pattern on pattern, so long as the scale, color, and shape of them are in stark contrast to each other. (For example, a windowpane tie with this suit would be a much dicier move.) We also have to give props to Costas for his four-in-hand knot, aka the only acceptable tie knot, which is truly a rarity amongst his colleagues. Hopefully the folks over on Fox learn a thing or two from their NBC rival.