Posted at 17:47h in Press by Acton Style Group
0 Likes

In News by Karen Alberg Grossman

The XXXI Olympics in Rio will be the biggest media event in history, with NBC Universal presenting 6,755 hours of programming. Representing America, many of the 170 NBC commentators (the most ever for an Olympics) will be dressed in Hardwick clothing, expertly crafted in Cleveland Tennessee since 1880. (The female broadcasters will be wearing Lafayette 148, from a special capsule collection also made in America.)

Says stylist Amy Acton of Acton Style Group, who’s been working with NBC Sports for many years, “The male sportscasters are wearing suits and ties, or else sportcoats and trousers. I chose a lot of linen and lightweight wrinkle-resistant stretch wovens for comfort and cool. And lots of blue, since most men look great in blue. But since our sportscasters are all different sizes and all different personalities, the challenge is to create a cohesive professional look that still reflects their individuality.”

An astounding 6,755 hours of Olympic programming – that’s a lot of time for NBC broadcasters to be showing off their fabulous Hardwick clothing, accented with beautiful American-made ties by Lee Allison and David Donahue and fabulous American-made shirts by Gitman. Says Hardwick’s director of brand and digital strategy, Jake Cremer, “We’re proud that NBC chose Hardwick, a real tribute to our manufacturing team in Cleveland Tennessee who are able to produce the top-quality, fashion-right clothing that NBC was seeking.”

American style and artisanship at its best: Go USA! 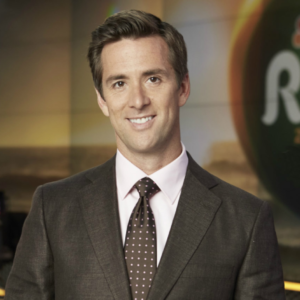