Posted at 18:02h in Press by Acton Style Group
0 Likes 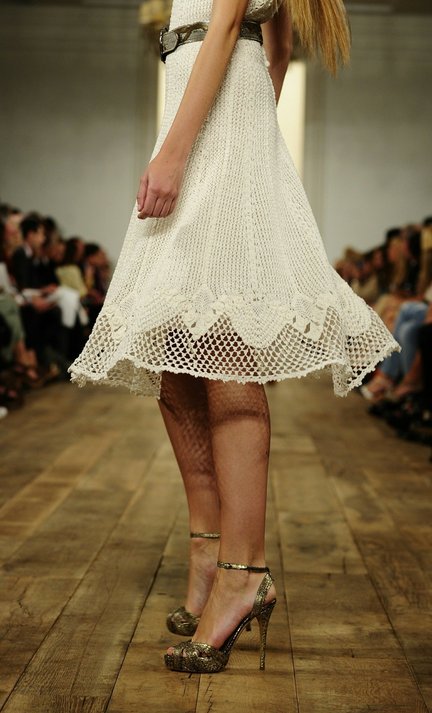 Models who lost the battle with their 6-inch heels weren’t alone in heading to the floor during spring 2011 Fashion Week in New York. Hemlines went right along with them — and industry insiders think the new longer lengths will sell to all age groups.

It’s hard to believe that when we’ve gotten accustomed to skin-revealing runways for what seems like forever — with skirts short enough to be blouses, and minidresses with the emphasis on “mini” — that things might be going south, in a good way.

Dipping Below The Knee

Style experts say they think women are ready for this lengthy fashion statement, which appeared in a variety of interpretations during the shows earlier this month at Lincoln Center. From asymmetrical to straight-as-a-ruler, the long route was the way to go for designers from Rebecca Taylor, Michelle Smith, Rubin Singer and Donna Karan to Michael Kors, Tracy Reese, Oscar de la Renta, Proenza Schouler and Ralph Lauren.

Though most designers showing their spring 2011 collections still mixed it up — featuring everything from minis to frocks that swept the floor — longer hemlines were one of the strongest trends to emerge.

“Let’s face it. It’s 2010, actually, we’re talking 2011, so there are no rules anymore,” says stylist Amy Acton, referring to the runway looks. She has created looks for clients from “The Montel Williams Show” to NBC’s pregame show “Football Night in America.” Along with partner Francesco Paladino, Acton operates the Manhattan-based Style Studio — a personal style concierge service.

“We can wear white in winter, black in summer, patent leather all year round,” says Acton, who lives in West Orange. “Most trends are cyclical. . . . So if the mini and short shorts have been at the forefront for the past few seasons, it’s time to go in a different direction, shake things up and reinvent the wheel.”

“So many rules have been broken over the years,” says designer Singer. “My collection was about razor-sharp edges and strong, powerful lines. The proportion was a study on high and low.

“I felt the play on very short and very long pronounced the statement,” he adds. “I even showed some maxi-length chiffon gowns, with a mini-skirt lining, to pronounce the aesthetic dichotomy between the two.”

But Singer and other designers say a longer silhouette needs to have the right look to be contemporary and attractive.

“A long skirt needs to be tight or have an opening or a detail to lighten the line,” Singer says. “I believe if the clothes are sexy enough and make the women feel empowered, they will wear them.”

“I wanted to show long skirts simply because it had been a long time since we’ve seen that silhouette,” designer Taylor says. “It feels modern and cool, but to make a long skirt look sexy, there has to be some type of sheerness involved.”

Taylor adds she believes that going to longer lengths will “definitely” sell: “Teamed with a flat sandal and feminine T-shirt, the look is new and fresh.”

“For me, it was more about making garments the length that they should be, not following the trends,” says designer Reese. “If it was supposed to be a mini, it was a mini; if it was supposed to be T-length, it was T-length; a maxi, a maxi. This gives women a variety to choose what works best on their bodies.”

“My eye changes each season,” says Michelle Smith, designer for Milly. “Lengths to the knee, as well as longer lengths (that) sweep the ground look fresh and new to me.”

Smith adds, “I think every woman who loves fashion, no matter what age, wants to look current. I believe she will embrace the new lengths as I have.”

“I loved the longer looks we saw at the collections in New York,” Graham says. “It seems most of the designers chose to show either super-short or this longer length.

“For me, I think longer looks so new,” she says. “Next season, from the super-slim dresses and skirts at Prabal Gurung to the longer body-skimming looks at Calvin Klein, women have so many options to choose from.”